At some point it penetrated our grey matter that the safe was connected to a robbery and we should tell our folks. Joe Woods then chief of police came and picked up the safe and we laughed at the reaction the owner would have when discovered the missing photos. When I got in trouble, which was fairly often, my father would announce my punishment like a judge passing sentence. This meant I was relegated to my bedroom, which had neither heat nor electricity, every day for one week.

Well, it turns out that during those cherished years, the Ramapo closed for trout stocking each Thursday and re-opened AM on Friday morning. One spring, as I serving a sentence in my room, I cooked up a plan that would allow me to fish on Friday morning; with no one being the wiser. The plan, which I subsequently executed was to quietly go out my bedroom window onto the porch roof and then climb down the red cedar tree to the lawn below. 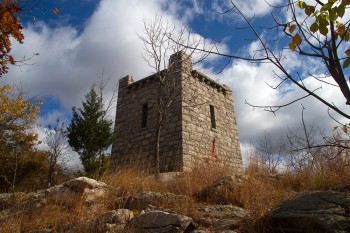 Next, I would beat feet to the river, catch a mess of fish which I always did , release them and climb back into my bedroom in time to get ready for school. As fate would have it, my plan backfired; but in a good way. When I got to the aforementioned sycamore tree, I hooked a big one.

Now I had a serious dilemma. Should I release the fish, which might win the annual trout contest, or bring it home and face another possible week in my room. The choice was easy. I took the fish home, dropped the subterfuge, and proudly walked through the front door with fish in hand. It turns out that the one thing THE BIG V hated more than tax time was getting no reaction from my father when she breathlessly recited all of the unspeakable things I had done over the previous 12 hours. This was to be a case in point. While it seems hilarious all these years later, I had poor V on the verge of a trip to Bellview.

John had kept the photo all those years, unaware of the fact that the brat in the picture was his son-in-law.


I remembered both of these features; but only after he mentioned them. Over a good bottle of Cabernet, we coaxed out plenty other memories of our time in Pleasureland, as well as the names and personalities of some of our neighbors. There were plenty of smiles to go around! The Ramapo, which I so fondly remember, was both clear and clean. In the spring of the year, at the same time as the long awaited opening of trout season, I never slept the night before large schools of spawning yellow perch could be seen passing under the white bridge. Soon after, their egg masses which we called ribbons could be seen all over the bottom.

These were fish that had survived the high water temperatures of summer and made it to the following year. We could always identify them by their beautiful color, which was much richer than the fish that were fresh from the Hackettstown Hatchery. Additionally, prolific may fly and caddis hatches gave further testimony to the quality of the water which flowed past Pleasureland. One of us would hold the screen on the bottom while the other raked the cobbles on the upstream side.

When we were finished, we would have a can full of hellgrammites, which would bite like the devil when you put them on the hook , but made exceptional bait. Where, you may ask, is this story going? Some unknown benefactor s , which I believe included Mr. We could actually play in it and when we went up the steps for another trip to the diving board our feet actually came out of the water clean.

Shortly afterward, the sand disappeared and silt began to build up in its place; beginning on the downstream side of the wall and increasing with each successive year. My best guess is that Hurricane Carol and Hurricane Diane, which also went through our homes in and , took away our sand. Next we began to see floating masses of algae coming down with the current. We now realize it was caused by excessive nutrients in the water column, which were harbingers of seriously degrading water quality.

Around this time kids started to experience serious ear infections. These infections never went away of their own accord and resulted in the inevitable trip to Doctor Davy or Dr. Canavan for a dreaded shot of Penicillin in our little caboose. Once again we had no concept of what was going on at the time, but we now understand that this resulted from the introduction of an exotic aquarium plant named Eurasian Water Millfoil.

The earaches continued until parents finally realized that our wonderful resource was now forbidden fruit. Pleasureland and the surrounding area was a kid's playground like few others. The primary recreational features were the yet unspoiled Ramapo River and Pompton Lake which provided quality fishing, swimming, boating, and ice skating. Potash's Island, which we accessed from Island Terrace, was a great place to explore and had some of the best waterfowling and woodcock flights that I have ever seen.

Rotten Pond, which was a poacher's paradise, was a stiff walk from Pool Hollow, but we fished it relentlessly; by day and by night.

We also had two small bridges "The White Bridge" and "The Pleasureland Bridge" which we climbed on, hid under, fished from, and jumped off. You will not be surprised to hear that dry feet were as rare in those days as a shiny new quarter. The Ramapo Mountains and the abandoned farm fields behind Romaine's junk yard provided a great place to hunt, shoot, explore, and climb. The SAND PIT was also a place where we jumped from high banks to the soft sand below and looked for high quality shell fossils which were surprisingly common.

This was a tall living oak that had two trunks one close to the water and one much higher which leaned far out over the water.

This great resource was complete with sand, a retaining wall, a diving board, and steps down to the water. Moms brought their kids there throughout the summer for years; until declining water quality made the Ramapo unsafe for swimming. Kids entertained themselves for years by swimming out and standing on it. This added an element of prestige to kids who could locate it and climb on. At the end of Jerome Ave was a place where neighbors tied up their boats. It was also a great place for kids to fish and get on the ice for skating. We called this place "The Cove" because it was a back eddy along the river which was sheltered from the main river channel.

Because this area was relatively shallow and had no current, it was a safe place for skating, which had lots of room and a small island which we loved to race around. There were also two sand lots where we could play baseball; one of which had a professionally made chain link backstop behind home plate. While we never admitted it at the time, we also loved to wait until dark, then wade across the river between the end of Island Terrace and Pleasureland Park.

This crossing got us around the locked gate and gave us access to the Pleasureland swimming pool; high dive and all.


In Oakland, there was a historic village streetscape that is virtually unseen in the US today. More significantly, the drive along the river corridor, under the spectacular canopy of maple trees was ranked one of the 10 most scenic byways in America at the time. Though I didn't perceive this beauty as a kid, I was well aware of it before I finished school and moved on. Additionally, the education system worked well, we enjoyed a close knit family network, drugs came from Sharr's Drug store in Pompton Lakes, there were few unwanted pregnancies, doors were seldom locked, young kids left for school early in the morning and came home after dark without worrying their moms, neighbors maintained their small homes, helped their neighbors, and worked hard to keep their heads above water.

One of the most incredible acts of selfless charity occurred during the summer that neighbors helped Elsie Barwick raise her house. Physiologically Younger and Stronger, being a scrutiny into the domain of the laws to which Nature sometimes marvellously resorts to for aid in its restorative powers. By Jerome Kidder, M. Howard Malcom. By Howard Malcom.